Rights? Welfare? Both? Neither? 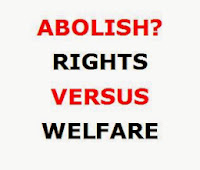 Animal Rights or Animal Welfare? or Neither? or Both?

Some vegans see a conflict between animal rights and animal welfare.

Rights is that non-human animals should be allowed to live out their natural lives without exploitation. Welfare is that the animals should be looked after during their life before they are sent to slaughter. The latter has resulted in descriptions of animal products like "free-range",  "organic meat", "compassionate farming" and "humane".   Is humane a myth?

Of those definitions clearly vegans believe in animal rights as this is the only way that stops animals from being killed and/or exploited. Some of the animal rights people call themselves abolitionists.

Some of the welfarists, somewhat oddly, consider themselves to be vegans who think that the animals who are being exploited deserve better conditions. As a result they campaign for such things as "free-range" eggs, "humane" slaughter and reductionism (meat-free Mondays and the like). The animal rights people maintain that such campaigns are a waste of time and that the only issue is to make everyone vegan which, of course, solves the problem of both welfare and rights altogether. Time certainly isn't on the side of the animals or the planet for anything other than the vegan lifestyle as defined by Donald Watson in the '40's.

Of course what happens in the meantime is where it becomes difficult.

For example; should vegans go and stop badgers being culled? For me the answer is "yes, of course, if a life can be saved". If vegans want to go out on a cold winter's night and stop a badger being on the receiving end of a few bullets then fine. I only know vegans who do this. One would hope that any non-vegan badger savers will, as open minded animal lovers, be versed in veganism whilst they are at it by the vegans. Of course the whole issue of badgers is a complex one. Obviously the longer the cull itself goes on then more of the atrocities carried out within the dairy industry are exposed.

The representatives of one abolitionist society told me that it is a waste of the badger-savers' time, another told me that the badgers should be killed and that for every dead badger there will be one more vegan! The asurdity of their "logic" and their, often, horrible posts, abolitionist behaviour does the cause of veganism a terrible disservice. It is a mind mumbing disappointment that, because of some abolitionist fanatics, a vegan has to post things like this:

One cannot help wondering if it would be better if the "Rights v Welfare" thing didn't exist at all and there is even a thought that such labelling is in itself unhelpful and hinders the ability to care for animals. This is discussed in this interesting article: http://www.casj.org.uk/blogs-archive/animal-welfare-vs-animal-rights-false-dichotomy/
The article concludes; "I want to suggest that the animal protection movement should not divide itself – or let itself be divided – by the labels of ‘welfare’ or ‘rights’.  Rather, we must recognise that animal welfare and animal rights are worthy and compatible ideas.  Crucially, they are also the core beliefs which unite all those who strive for the better protection of our fellow animals."

Happy Cows - Behind the Myths