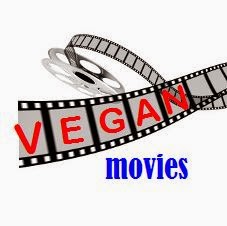 Well there aren't really any vegan movies or films. There's a short called Vegan Love, but most filming done about veganism is for documentaries.  The Animals Film was an eighties British documentary with music by Robert Wyatt and Talking Heads with narration by Julie Christie. The format was emulated more recently with Earthlings, this time Moby provided the soundtrack with Joaquin Phoenix narrating - both incidentally are vegans and animal rights activists. Earthlings has proved quite successful in converting people to veganism because, like Cowspiracy, it clearly shows the problems with the dairy industry and cow factories. Cowspiracy exposes the environmental disaster that is the dairy/meat industry. Behind the Mask is about the Animal Liberation Front (A.L.F.) and documents their pro-active approach of liberating caged animals and confronting companies that carry our vivisection.

The last four films listed below are to do with the correlation between what you eat and health.... they are not all specifically vegan and are also shown on the Food as Medicine page.
The Game Changers (2018) Presented by James Cameron, Arnold Schwarzenegger, Jackie Chan, Lewis Hamilton, Novak Djokovic and Chris Paul — a revolutionary new film about meat, protein and strength.

What the Health (2017) a film about healthy eating from the makers of Cowspiracy. The film addresses the health problems caused, mainly, by the standard American diet (SAD) and how the distinctions between the food and drug industry are becoming less transparent and more open to abuse. It includes statements from many independent doctors and nutritionists.


Vegan Love: A Romantic Comedy Short Film about Vegan Dating
Grab your veggie burgers and soya lattes in this uniquely green take on the romantic comedy!

Food Choices (2016)
Food Choices covers everything you could possibly wonder about veganism. It covers the health aspect, the environmental impacts that animal agriculture has on the earth, and the cruelty that animals have to endure just for people to eat them. It also covers topics such as vegan athletes, vegan kids, and much more. The filmmaker is Michal Siewierski.

The Animals Film
"I do not know when I have been so moved by the power of the cinema as a medium to transform the entire sensibility of an audience."  -  The Sunday Times (UK)
Help the important campaigns of animal rights organisations. There are dozens easily found on the internet. Some groups emphasize the goal of abolishing the exploitation of animals, especially for food and science, while other groups tend to press for 'humane' animal exploitation, (arguably a contradiction in terms). The differences of approach extend to all human uses of nonhuman animals. It's important you judge for yourself whose strategy for change you wish to support.

Earthlings (2005)
"Of all the films I  have ever made, this is the one that gets people talking the most".  -  Joaquin Phoenix.  With Earthlings you can legally watch it online for free on vimeo. It may be prudent to say that their are graphic scenes of what can only be described as animal abuse, torture and killing. It is little wonder that so many viewers who see these atrocities become vegan.


Vegucated (2011)
Vegucated follows three meat lovers who agree to try out a plant based diet for 6 weeks.
They learn so much about health and the hidden sides of animal agriculture. They risk everything to expose an industry that they supported only weeks ago.

Cowspiracy: The Sustainability Secret (2014)
The film that environmental organizations don't want you to see
"Cowspiracy may be the most important film made to inspire saving the planet." ~ Louie Psihoyos, Oscar-Winning Director of "The Cove"
"A documentary that will rock and inspire the environmental movement." ~ Darren Aronofsky, Director of "Noah" and "Black Swan"

Speciesism: The Movie (2013)
Speciesism is a documentary where Filmmaker Mark Devries investigates factories that raise animals for human consumption.It challenges the beliefs that humans are above morally superior animals.


Live and Let Live (2013)
Live and Let Live is a documentary that examines the relationship that humans and animals have, the history of veganism, and also the health and environmental reasons that shift people to go vegan.

Food Matters (2008)
"With access to better information people invariably make better choices for their health..."
Food matters is concerned with health. The couple who started it did so to "save my father's life and is the reason Food Matters TV was born. FMTV is the world’s first on-demand streaming site of health and wellness videos.
"We believe that food is better medicine than drugs, that healthy can taste amazing and that the best nutritionist in the world is you!"
Their message is not one of veganism so don't expect the "spiritual enlightenment" that comes with knowing you are not part of the slaughter.


Food Inc (2008)
This documentary takes a look inside America’s food industry, going back to where the food came from and what the animals had to go through in order to get on people’s plates.

Forks Over Knives (2011)
What has happened to us? Despite the most advanced medical technology in the world, we are sicker than ever by nearly every measure.
“I watched that film Forks Over Knives. I went into the kitchen, I took everything out of the kitchen that was not a plant – and for 5½ months I’ve eaten only plants.”  -  James Cameron (Film Director)

Farm to Fridge - The Truth Behind Meat Production (2017)
This film is narrated by James Cromwell who became vegan during the filming of the Hollywood film "Babe". It is about 12 minutes long.

Swine - Antibiotic Resistance is a reality. The world's most destructive industry has a secret it doesn't want you to know about, Guardian journalist Jack Tomlins goes undercover to reveal the truth in this short film.

The Ghosts in Our Machine (2013) is a Canadian documentary film by Liz Marshall. The film follows the photojournalist and animal rights activist Jo-Anne McArthur as she photographs animals on fur farms and at Farm Sanctuary, among other places, and seeks to publish her work. The film as a whole is a plea for animal rights.

Blackfish (2013) tells the story of Tilikum, a performing killer whale that killed several people while in captivity. Director-producer Gabriela Cowperthwaite compiles shocking footage and emotional interviews to explore the creature’s extraordinary nature, the species’ cruel treatment in captivity, the lives and losses of the trainers and the pressures brought to bear by the multi-billion dollar sea-park industry.

Fat, Sick and Nearly Dead (2010)
100 pounds overweight, loaded up on steroids and suffering from a debilitating autoimmune disease, Joe Cross is at the end of his rope and the end of his hope. In the mirror he saw a 310lb man whose gut was bigger than a beach ball and a path laid out before him that wouldn’t end well-- with one foot already in the grave, the other wasn’t far behind. The film chronicles Joe’s personal mission to regain his health.

Your Daily Vegan has a really comprehensive list of vegan and related movies.

Yet, another list of vegan and/or healthy eating videos.