Reasons to be vegan are free! 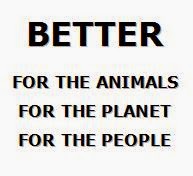 * Animal agriculture (An/Ag) “Livestock’s contribution to environmental problems is on a massive scale. The impact is so significant that it needs to be addressed with urgency.” - United Nations Food and Agriculture Organisation 2006

Top 12 reasons to be vegan


25 Reasons for Being Vegan

1. It's cruel to support the enslavement, forced impregnation, torture and slaughter of innocent animals. This includes intense suffering for animals used for dairy, eggs, honey, etc.http://www.nationearth.com/earthlings-1/ , see also https://www.landofhopeandglory.org/ , https://befairbevegan.com/
2. We can easily thrive on a vegan diet, see scientific references I collected here:http://bloganders.blogspot.com/2013/08/humans-can-live-and-thrive-on-healthy.html?m=02
How can we justify killing animals who want to live for our taste buds in a violent process that reduces them to a product?

3. "I only eat organic, we are carnivores". There are many excuses answered here: http://bloganders.blogspot.com/2013/08/arguments-for-veganism-and-counter.html?m=1

3b. The largest study ever conducted on farming and the environment, which was published in the journal Science in 2018, analysed almost 40,000 farms in 119 countries and covered 40 food products that represent 90% of all that is eaten. It assessed the full impact of these foods, from farm to fork, on land use, climate change emissions, freshwater use and water pollution (eutrophication) and air pollution (acidification).

"A vegan diet is probably the single biggest way to reduce your impact on planet Earth, not just greenhouse gases, but global acidification, eutrophication, land use and water use," said Joseph Poore, at the University of Oxford, UK, who led the research. ”lt is far bigger than cutting down on your flights or buying an electric car,” he said, as these only cut greenhouse gas emissions.

4.Species Extinction: the World Wildlife Fund concluded that meat-based diets are responsible for the loss of 60% of global biodiversity.
https://www.wwf.org.uk/updates/appetite-for-destruction

4b According to Greenpeace Brazil, animal agriculture is the leading cause of Amazon Rainforest destruction.
http://www.greenpeace.org/international/en/news/features/cattle-mapping/

5. The World Bank disagrees. They concluded that animal agriculture is actually responsible for 90% of Amazon Rainforest destruction.
https://openknowledge.worldbank.org/handle/10986/15060

8. According to a 2006 study by the Food and Agriculture Organization of the UN, animal agriculture is responsible for 18% of greenhouse gas emissions.
http://www.fao.org/docrep/010/a0701e/a0701e00.htm

9. The World Watch Institute reported that animal agriculture is actually responsible for 51% of greenhouse gases.
http://www.worldwatch.org/node/6294
If you do a correction related to their used methane gas number, it is 42%.

10. Animal agriculture is so water-intensive, it takes 2,500 gallons of water to produce 1 pound of beef.
http://www.earthsave.org/environment/water.htm

11. It takes 896 gallons of water to produce 1 pound of cheese.
https://www.ewg.org/meateatersguide/interactive-graphic/water/

12. At the rate in which humans consume fish, we may see fishless oceans by 2048:
https://gelr.org/2015/10/23/a-leading-cause-of-everything-one-industry-that-is-destroying-our-planet-and-our-ability-to-thrive-on-it-georgetown-environmental-law-review/

13. The largest group of nutritional professionals in the world concluded that we can get all our nutrients from a vegan diet and prevent many diseases.
https://www.ncbi.nlm.nih.gov/pubmed/27886704

14. Harvard also concluded we can prevent many diseases with a vegan diet.
https://www.health.harvard.edu/press_releases/nuts-seeds-beans-are-good-steps-toward-a-plant-based-diet
Watch The Game Changers on Netflix: https://www.netflix.com/gb/title/81157840

The human race has destroyed over 80% of wild mammals :
https://www.theguardian.com/environment/2018/may/21/human-race-just-001-of-all-life-but-has-destroyed-over-80-of-wild-mammals-study

It is due to our lack of respect for animals that we kill them for tusks, meat, dairy and eggs, etc. The solution is to stop exploiting animals for all purposes and be vegan.


So, you can see that the Meat & Dairy industry is a major contributor to misery on this planet. It is destroying the health of people in rich countries, starving those in poor countries, it is torturing & killing billions of animals every year and in the meantime, it is one of the major factors in the destruction of the environment.

So, what does the meat & dairy industry have to say in its defence?
Well their only real point is usually "Meat is tasty" - fair enough a lot of people enjoy the taste of meat - but there are plenty of delicious vegan alternatives and if you really crave meat & dairy, nowadays there are plenty of healthy non-animal alternatives - just look in the supermarket & health food shop. So I hope you will agree it's pretty selfish to consider all the evidence & then say "well I know you're right about the environment & health & the animals - but I just love my meat."


Even more on the reasons: 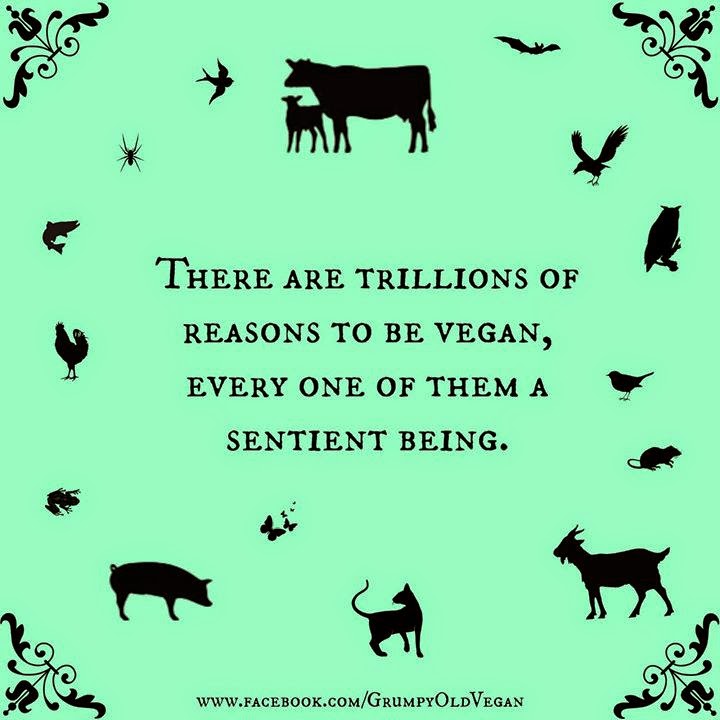