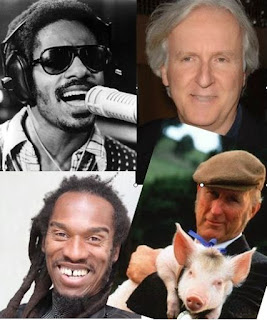 It's about veganism not vegans, but, here are a few interesting vegans...

Melanie Joy, Ph.D., Ed.M. is an internationally-acclaimed speaker, award-winning author, a Harvard-educated psychologist, and professor of psychology and sociology at the University of Massachusetts, Boston. Video about "carnism"    www.Carnism.org

Joachim Phoenix born in 1974 he became vegan three years later. He is an animal rights activist and narrated Earthlings .

Moby, as a musician has sold over 10,000,000 records worldwide and is an animal rights activist. His music is used in Earthlings.

Bryan Adams Had a worldwide number one with "(Everything I Do) I Do for You" from the movie Robin Hood Prince of Thieves. The song broke the record of 16 weeks at number one in the UK. He became vegan in 1986 after eating a steak which made him feel ill.


Stevie Wonder, famous for such popular songs as "Superstition", "You Are the Sunshine of My Life" and "I Just Called to Say I Love You", became vegan in his sixties.

Morrissey  A singer/songwriter who was a member of The Smiths, an band from the 1980's. Morrissey is now a solo performer and will only play gigs if the on site catering is all vegan!

Percy Bysshe Shelley
In his book A Vindication of Natural Diet Shelley argued that eating meat was unnatural. He maintained that diseases and immorality arose from mankind's "unnatural habits of life". A meatless diet was the best regimen for maintaining a healthy and disease-free lifestyle. He wrote that human diseases could be decreased by a return to a natural vegetable diet.

James Cromwell the actor. Became vegan after acting in the movie "Babe". He narrates the 2011 film "Farm to Fridge - The Truth Behind Meat Production".

Carol J. Adams is an author.
Her most well known book, from 1990 with a recent update, is called The Sexual Politics of Meat (subtitled "A feminist vegetarian critical theory"). Here are some people talking about the book.
It seems that since the book was first made Carol has become vegan. She has an interesting blog.

Q: I’m a meat-eater, or as you call it, a “blocked vegetarian.” Am I going to Hell?
CJA: No, you’re living in it now. You think change is too hard; not changing is harder, you just haven’t found that out yet.

Shelley Williams When I started to realise that publicising and promoting veganism was a "no brainer" Shelley was the first person I came across on YouTube doing "vegan videos". I thought she promoted veganism in an articulate, informative and humourous way. Nothing "stodgy" about it!  Try her "Vegans Can't Eat ANYTHING" video. Shelley grew up on a farm and recently posted this on Facebook: "My mum's been Vegan for 4 years today She's gone from raising cattle for slaughter, to turning her property into an animal sanctuary! I'm so proud of you, Robyn!! I'm humbled to have such an amazing mother." (See more heartwarming farmer-turned-vegan stories.)
Someone on Facebook described her like this: "Shelley is an intrusively articulate animal rights equalist (she coined this self-explained term at age 9). Her ideas and writings are showcased on her website and through an arcade of fact-based, philosophically reasoned, and hard-hitting videos on YouTube defending ethical veganism on principles of morality, the environment, and health.
If you are a nonvegan, Shelley will try anything to get you to rethink your choices, including trying to eat her own hair lol, as she does in the YouTube video, "It's Natural to eat Meat". In the process of rebutting the "eating meat is natural" argument, Shelley offers an array of reasons to show that remaining nonvegan is morally inexcusable and bloody unwise.

Whether vegan, nonvegan, or in transition, your time spent with Shelley's videos will be repaid in value several times over."