A few things to consider…

Palm oil comes from a palm tree. It would appear on the surface that this makes it vegan. Indeed The Vegan Society considers it vegan. They do currently endorse products containing it, so it could be claimed they gain financially by taking this stance. Clearly more people are capable of being vegan without the perceived restriction of not buying products with palm oil in.

So, why would anyone think Palm Oil isn’t vegan?
It is the method of production that is seen by many more “knowledgeable” vegans as what makes it not vegan. The production of palm oil is the cause of one of the biggest environmental disasters on the planet. Massive areas of rainforest are simply burned to the ground so that palm oil plantations can be created. This indiscriminately kills the inhabitants of the rainforests;

“orangutans could become extinct in the wild within the next 5-10 years, and Sumatran tigers less than 3 years.” * (as of 2016)

Is there such a thing as “Sustainable” Palm Oil?
There is only one area of palm trees that can realistically be considered sustainable because the trees grow naturally. www.traidcraft.co.uk/fairpalm

Here are links to websites and articles about palm oil and, below them, The Vegan Society statement about it… 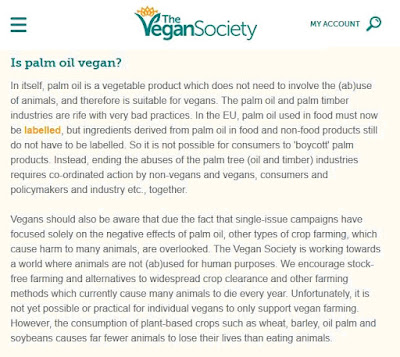