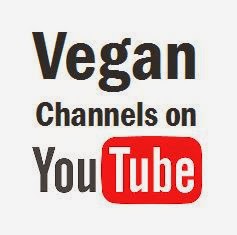 Shelley Williams -   Shelley Williams was the first person I "found" online speaking about veganism. Her "Vegans Can't Eat Anything" video made me realise that it was important not to be a passive vegan and to speak up for the animals; to "educate" and spread the message.

Bite Size Vegan - Emily's fun, friendly info on veganism [simplified] - education in the form of “vegan nugget” videos with loads of information distilled down to 5 minutes (more or less).

The Vegan Corner - raw and cooked recipes - considered to be the healthiest in books like "The China Study" or "The starch solution". The less you mess with ingredients, the healthier the dish will be. Proud to be the first channel dedicated entirely to low-fat vegan cuisine.

The Animal Holocaust - A Life-Changing speech by Gary Yourofsky. A unique voice for those in the most of need. Over 10 million people have viewed this channel!

Vegan Ninja Bunny -  Vegan by Day... Ninja by Night... Bunny all year round ;]   Informative videos about why veganism is such a good thing - presented in a clear and charming manner! Especially informative is the four-part video presentation of "Why Milk Isn't Good For You".

Vegan Future - VeganFuture promotes the health and environmental benefits of the vegan lifestyle. In addition we aim to raise awareness about the cruelty of the meat and dairy industries.

Mr Veggieman 11  -  "Go Vegan or else!"  An interesting assortment of videos about veganism

The Vegan Zombie - We do a vegan cooking show that is set in the zombie apocalypse. Along with loyal K9 sidekick, Indy, we fight off zombies and make delicious food. We might even give you tips and tricks on how to stay safe from zombies...