"The Best Speech You Will Ever Hear" 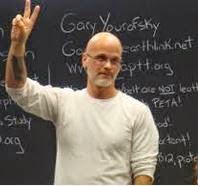 Gary Yourofsky was an animal activist who now travels around lecturing on veganism and the day to day practicalities of eating a vegan diet. He is probably most famous for a speech, now available with subtitles in many languages, often called "The Best Speech You Will Ever Hear" this was recorded in the summer of 2010.

I should point out that Gary is a very emotive animal advocate. He talks about an eye for an eye and is also very pro-Israeli activity in Palestine. I'm left thinking of Gandhi's oft-quoted statement; "an eye for an eye makes the whole world blind". Gary says one fights violence against animals with violence against the perpetrators.  He says that people who rape animals (e.g. cows are raped repeatedly in order to lactate permanently) should be raped themselves. To put it very mildly he does not suffer animal abusers lightly - or is he saying these things to gain attention to highlight the problem? For the pacifists, this diminishes his pro-animal stance although the younger generation seems to get the idea of fighting fire with fire and shouting out against the cruelties.

Gary does not sit well with the status quo either! He is banned from some countries, including the United Kingdom where he is labelled as a terrorist becasuse he has released caged animals on factory fur farms in Canada.

Choose a language! This speech has been subtitled into 34 languages