Links to Vegan websites and organisations 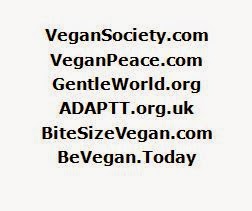 There are now so many vegan websites.  Here is a selection which, between them, cover just about everything you'd ever need to "know" about veganism.


The Vegan Society
One world. Many Lives. Our Choice.
The original organisation founded by people who left the Vegetarian Society to do more for animals. They included eggs and dairy products in foods to be avoided and added in clothing and any exploitation of animals to their newfound cause which they called veganism. The society has kept the vegan ball rolling, in one form or another, and not without controversy, for over 70 years. It, sometimes takes contensious opinions (scroll down on this link!) on vegan matters.

The American Vegan Society
First, learn about the bounty of plant foods and eliminating animal products. Then utilize dynamic harmlessness to "do the least harm and the most good" to complete the compassionate lifestyle of veganism.

Vegan Peace
Striving towards peacefully sharing our Earth.
A welcome approach to veganism... it even includes a section on peaceful parenting.

Gentle World
For the vegan in everyone.
The site covers many topics of veganism, from recipes, through which condoms are vegan, to the perennial "is honey vegan" question!

We help people go vegan, vegetarian or reduce the amount of meat they eat.
Reducing meat consumption helps save your health, the environment and other people.


ADAPTT
Animals Deserve Absolute Protection Today and Tomorrow
The "All About Veganism" page is especially informative and the recipe's are very yummy! The page is Gary Yourofsky's - at one one time imprisoned as an animal rights terrorist, he is now more concerned with talking to open-minded people who are capable of thinking through his reasoning. Here is a link to his 60 minute YouTube lecture, which is available with subtitles in 43 languages. The video has converted thousands of people to veganism.  Gary also has a channel called Gary-TV

Bite Size Vegan
veganism [simplified]
The website is the brainchild of Emily Moran Barwick and is so named because she is small and also because her vegan-info videos are all quite short at around five minutes. The website has many accompanying videos on her YouTube Channel   Also, if you sign up to this site you get an excellent 20 page E-book: "Vegan Answers to Common Questions and Objections".

Of course all these websites also have a presence on facebook.

Other well developed websites worth a look are Vegan Street, Evolve, PETA (People for the Ethical Treatment of Aminals) Vegan Starter Kit and Vegan.com


I do not know of a vegan specific environmental organisation or association. Since you cannot possibly be an environmentalist unless you are vegan then I guess there really isn't a need for one.