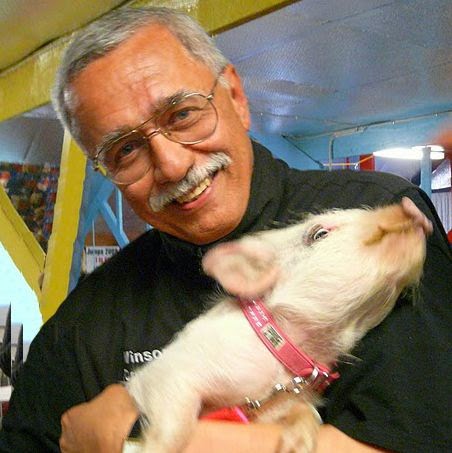 The most passionate speech I've heard about NOT eating animals was by Philip Wollen.

Philip Wollen was second in command of the massive Citibank - one of the largest banks in the world. One day he went with some of the banks clients to see what was being done with the banks investments; he was taken to slaughterhouses. He recalls the sound as like that of his dying father. He gave up his job and decided to spend the rest of his life caring for animals and not support slaughterhouses.  He formed The Kindness Trust which has a website and a facebook page.

You can hear his famous speech in a debate called "Animals Should Be Off the Menu" in this 10-minute video on YouTube.  The transcript of this speech is below if you prefer to read it.
The full debate, nearly two hours, also includes Peter Singer's articulate segment.

Transcript to The St James Ethics and Wheeler Centre debate


Introduction:
On behalf of St James Ethics Centre, the Wheeler Centre, The Melbourne Food and Wine Festival, The Age, The City of Melbourne, and the ABC… all of whom have worked together to make this event possible, I would like to welcome Philip Wollen.